The Love That I Have, by James Moloney: on timing. 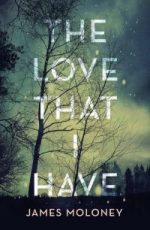 The love that I have

There’s something to be said for timing in regards to books. It is, in fact, a critical element of the plot of this particular novel, a surprising gem by one of my favourite Australian YA authors – Touch Me still rates as one of the best books I’ve taught. When I started to read The Love That I Have, it had just arrived on my desk as an ARC, and I dove into it because, well, James Moloney. But it didn’t really grab me. I’m not gonna lie, it started off feeling a bit like someone decided they wanted to write the next Book Thief or Boy in the Striped Pyjamas (which are, incidentally, both mentioned in the “if you liked” blurbs by the publishers of this book). I read maybe a third of it, and put it down, moving on to other things.

And then, this book was published, and it started to appear in my news feed. There’s something to be said for Facebook’s marketing algorithms, right? New Australian YA book posts – yep, Tamara will get hooked by them. And indeed she did. So I picked it back up again, and from that point on I really loved it. I don’t know if it’s a book that is slow to start, and builds as it goes through, or if I was not in the right head space to be reading it when I started. I don’t know if I will ever know, really, as I can’t go back and read it again with fresh eyes, so if you’ve read this one, I’d love to hear what you think!

And, to the book itself. It’s a beautiful story about a girl who works in the mail room in a concentration camp, and who starts pretending to be someone else in response to the letters written by one of the prisoners. The idea that captured me most was how much we can create ourselves and our reality through our words, and it made me miss writing letters. (Not that I’ll probably do anything about that, to be honest, but for a moment there I was seriously longing to start handwriting missives to everyone I know.) There are some elements that seemed a little contrived to me – I mentioned the importance of timing in this novel earlier, and it seems to me that a great deal of what happens relies a little too much on good luck, and good timing. But, despite that, I really enjoyed the premise, and I was invested enough in the characters that by the end I was moved to tears on the train. The last few pages hit me with an emotional punch that I was simply not expecting.

So, my recommendations? I think it’s a good book, and if I had it in my book room as an English teacher I certainly would give it a go with the right class. I personally don’t think the comparison to The Book Thief holds up, because there’s something completely brilliant about Zusak’s book that I don’t find in Moloney’s, but that doesn’t discount its quality for me. A compelling, emotional story, which provides an interesting insight into life in Germany from a few different perspectives – often ones that are overlooked in the traditional historical fiction narratives dealing with WW2 under the Nazi regime.

Posted May 27, 2018 by Tamara Reads in category Book chat, YA Books