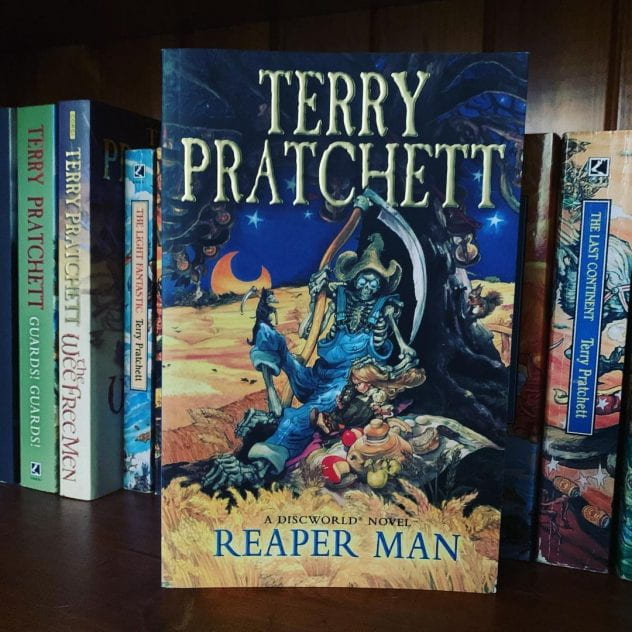 “Was that what it was really like to be alive? The feeling of darkness dragging you forward?
How could they live with it? And yet they did, and even seemed to find enjoyment in it, when surely the only sensible course would be to despair. Amazing. To feel you were a tiny living thing, sandwiched between two cliffs of darkness. How could they stand to be alive?”
Death isn’t alive. He’s an anthropomorphic manifestation of one of the two inescapable realities of life. (The other is taxes, which is way worse, because it harasses you every year, whereas Death only comes once.) Death, however, appears to be developing a personality, and this just won’t do. So, he’s given a life timer, and the sand is running out.
Meanwhile, with no one to reap them, when people die they just, kind of, don’t. This is most inconvenient, especially for Windle Poons, who as a Wizard had expected Death to show up to reap him personally. He now finds himself not alive, not really undead, and trying to solve the mystery of the globe-like eggs that are appearing around Ankh Morkpork with his new friends from the Fresh Start Club (an undead-rights activists group who I love with every fiber of my being).
This is book 11 of the Discworld series by Terry Pratchett, and has been one I’d been looking forward to revisiting. Clever, funny, and profoundly insightful.