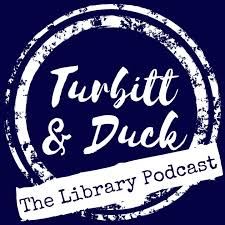 I stumbled across the Turbitt & Duck podcast just before the recent Sydney Writer’s Festival – a library geek I follow was featured on a recent episode, and I tend to stalk people pretty relentlessly on social media when I admire their work, so naturally I downloaded the podcast and started working my way through it, so thanks for getting this on my radar SnarkyWench! The real bonus for me is that there’s not a huge back catalogue to catch up on – often when I discover a great podcast I’ll start from the beginning and the sheer volume of episodes to catch up on can be quite overwhelming (I’m looking at you, Chat10Looks3). They chat to real people working in the library field, and it’s a fascinating view inside the enormous range of library and information services in this country. Library nerds are the best.

The episode I’m reviewing today is the latest, and it’s a fascinating discussion of the impact of curating and collecting indigenous works in various collections. They chat with Nathan Sentance, a Wiradjuri man who grew up on Darkinjung country, and works as project officer in First Nations programming at the Australian Museum. It ranges over a lot of ground in regards to indigenous collections – what struck me in particular is the discussion around what we need to consider when labelling and identifying works from first nations communities? I’ve always been fascinated by the power of language – I remember long detailed conversations during my early uni days about the power of words to represent our reality, and this is the aspect of Nathan’s discussion in this episode which struck me the most. When a mask, for example, is labelled as “creator unknown”, what does that tell us about the cultural history behind it? What does it say about the society that decided it was worth keeping as a piece of history, but didn’t make the effort to record any information about the person who created it, their nation, their heritage its purpose and meaning to them and their people? It’s a powerful reflection on how we label historical and cultural artefacts, and something I’ll be thinking about whenever I read those little plaques next to works at galleries in the future.

Nathan also provided the example of “spear” actually not really being specific enough as a signifier to describe that long pointy wooden thing hanging on the wall – that there are, in many indigenous nations, many different ways to talk about spears, depending on their purpose, their design, and who they’re used by. The act of homogenisation of culture is a really important one to be aware of, and something I’ve been really working to educate myself on as I’m looking at indigenous literature. The idea that one group’s nation, language, history and culture could stand in for every other is something that would be laughable in white society – just think of the outcry that would ensue if you called a Canadian “American” or accused an Irish person of being from England. Or, for the sportsing amongst you, imagine calling someone a Queenslander when you see them wearing a football jersey around State of Origin time, despite the fact that it’s blue – they’re basically the same thing, right?

So, another thing to think about as I continue to curate a giant booklist. Representation matters, and the importance of representation being managed by those reflected in the representation matters most of all. I had a bit of a moment on the train listening to this podcast – I freaked out a bit, going “bleeeerrrggghhh how am I supposed to deal with this, as a middle class white CIS woman? How do I ensure that what I’m doing isn’t just tokenistic?” But then I realised that this podcast is part of the extraordinary diverse network that I can call on to help me out with these decisions, and  serve as a great reminder that sometimes these decisions aren’t mine to make, and sometimes they are – and as long as I’m aware of this fact, and ensure I talk to the right people when needed, I’m doing my job. And that’s ok.

A couple of final thoughts about this podcast – it’s really cool to hear someone speak who says “interesting” with about the same frequency as I say “awesome”. (I think it’s Amy? The problem with podcasts is I always forget which name goes with which voice.) Also, I’m adding the phrase #GLAMnerd to my lexicon. And hopefully to a badge, coming soon to a chest near you. (If you’re near my chest. In completely non-weird ways. Hmmm. That sounds wrong, but I’m committed to it now, so it can stay.) As far as podcast episodes go, it works nicely with my commute – around about an hour, so I can listen to an episode in on leg of a trip. If you’re a fellow #GLAMnerd I’d recommend checking it out.