I love music, and I can rock out with the best of them – as long as the best of them are in my car with the radio turned up, or in my bathroom sharing my hairbrush microphone. That is to say, I harbour dreams of one day waking up with a prodigious ability to play or sing, but right now, I’m pretty much rocking the “loading songs onto my phone” skill as my singular musical talent.

Yes, I know book week is supposed to be about books. But I’m a rebel without a cause. I’m livin’ on the edge, man. I make up my own rules!!! (Sigh … yes, I’m really tired, I apologise. Back to the serious stuff.) For me, what it’s about more than anything, during Book Week and ANY week in Library Land, is the recognition of the power of stories. And in planning the Evans Festival of Stories, 2016 version, I had the opportunity to get some serious storytelling happening through music!

I met Dr Elliot Gann just over a year ago, as I wandered into the wrong room and didn’t realise until it was too late to escape unnoticed. He was at Educhange15, running some hands-on sessions on beatmaking, and the power of rap and music to connect and inspire students. By the end of this session that I really didn’t want to be in initially, I was sold. I’d made something that totally sounded like music – yes, me! Hairbrush singer, air guitarist, and steering-wheel drummer extraordinaire, made music! I had the best time, and I was thrilled to get the chance to chat to him over post-conference drinks. What impressed me most about my conversations with Elliot, and with his workshop, was that for him, music is about more than just making something that sounds great.  Music has power to heal, and to connect. Music is therapy and educational intervention. Music is a universal language, that transcends social and cultural backgrounds. Music speaks, powerful and compelling stories, and it gives a voice to those who have powerful and compelling stories to tell. And that, my friends, is something I wanted to be a part of Book Week 2016.

So, Elliot got in touch, telling me he was going to be back in Australia, and we organised for him to come along. A group of kids from our IEC signed up to his workshop, and he organised a couple of his friends to come along and make music with them. The rest, as they say, is history – a history that has implanted an earworm indelibly in my brain. 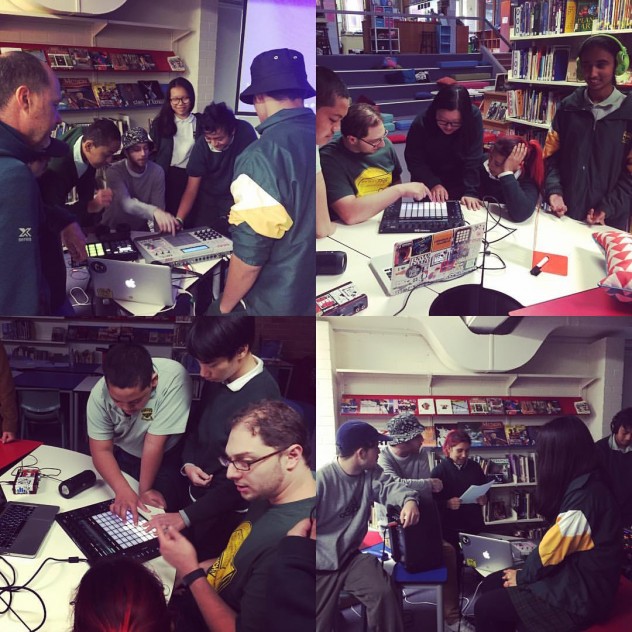 I didn’t get a whole lot of photos of the Today’s Future Sound workshop with our kids – mostly, it must be said, because I was flat out with our Write a Book in a Day workshop that was also running. But it was amazing. The guys were initially supposed to be at school for 2 hours. After the initial 2 periods, and a lunch time throng resembling a rock concert, and another hour at the end of the day, they eventually headed home, leaving in their wake many smiles, some new tunes, and an amazing rap son, written and recorded by a group of students who couldn’t speak English mere months ago.

I am so grateful to Elliot for the gift of music in our Festival of Stories. And I’m so thankful that, after some initial concerns about numbers, he assured me he’d come along anyway, and reduced the fee so that we could still provide this awesome experience to our students. He’s a genuine rock star, and I’m so proud to know him. We are going to continue to fill our library with music, and I’m looking at ways that we can get some of the fantastic equipment the guys used into our space. I’ve got no idea what to do with it, but I know that the kids will figure it out, and it’ll be music to our ears.

“We’re the science Giants.” A couple of hours, some sensational musicians, and some enthusiastic students, and this is what you can do! Some of our IEC students got to work with the amazing people from @todaysfuturesound – this is a snippet of Jules and Lucy running through their rap. We’ll share the final product soon – complete with beats, and a track they laid down themselves. #evansfestivalofstories #bookweek2016 #rapispoetry

“We’re the science giants.
never would we lie ’cause we’ve got pride like lions,
why the violence,
I like the sounds of silence,
Whenever I’m round school
but not the sounds of sirens.
I’m down to try things,
and spread our mind wings,
found we like things
that let our minds think.”

Word!!! Seriously, how awesome is that? I couldn’t think of a better message to send – and it was composed by the awesome students of my school. That, my friends, is Book Week at Evans. Incredible opportunities, passionate story tellers, and enthusiastic students, who create stories that will capture your heart.