The Midnight Library, by Matt Haig 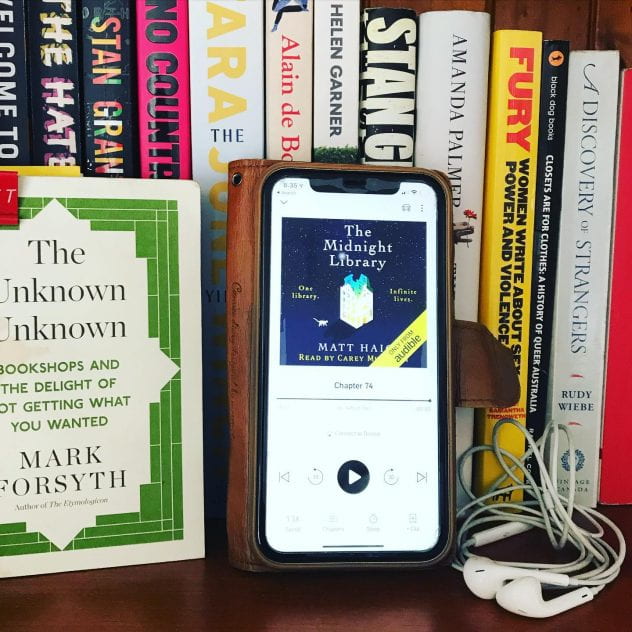 The midnight library, by Matt Haig

When a book has a chapter heading “God and other librarians”, I can’t help but feel it’s been written specifically for me. And in Matt Haig’s The Midnight Library, that’s kind of the point. But first, trigger warnings: suicidal ideation/ action. Depression, anxiety, drug & alcohol abuse/ addiction.
Nora is deeply unsatisfied with her life & is filled with regrets – alone, no meaningful relationships, she lost her job and her cat died. She decides she doesn’t want to see tomorrow, and does something about it.
She finds herself in the Midnight Library – existing only in the moment between life and death, as time doesn’t shift past 0:00:00, and curated by her school librarian, the Midnight Library is an inexhaustible collection of possible future lives for Nora, if only one thing had been different. Each potential alternative lives on the shelves in books with covers of varying thicknesses and in varying shades of green.
This novel deals with some complex topics, delving into theories of philosophy which was appropriately Nora’s major at university, as well as deep scientific concepts such as the multiverse and string theory. Despite this, it’s fairly easy to follow, with a linear narrative that carries you through Nora’s explorations of her possible lives if only she’d done something different – she ponders at one point, “Are there any other lives at all, or is it just the furnishings that change?”
There are moments of desperate sadness in this book, and whilst I found the beginning stronger than the end, it was compelling enough that I started listening to the audiobook yesterday morning when mowing the lawn, and laid in bed finishing it last night, reaching the final few words, appropriately, just as the clock hit midnight.
What would your book of regrets contain? I know mine contains a lot of things that I wish I could undo – mostly because of their impact on others than on me. But I hope that, most days, I’m more ok than not with the current volume of my life, depression and anxiety and regrets and all. Whilst I love the concept of The Midnight Library, I’m ok with not visiting it – although I do know without question who the librarian would be.