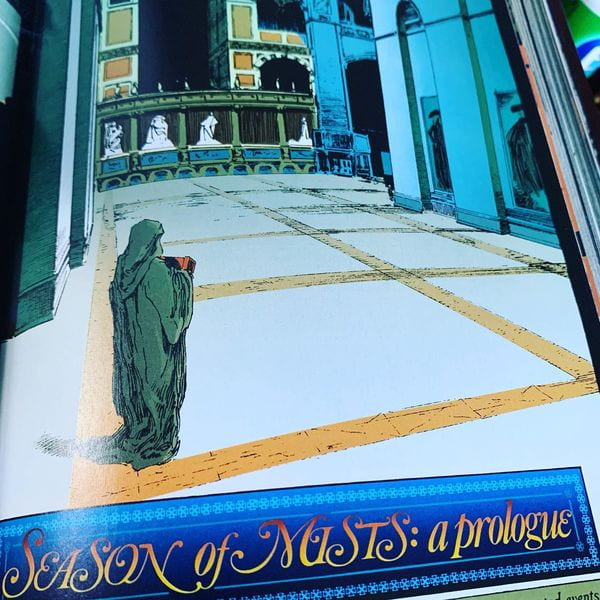 “October knew, of course, that the action of turning a page, of ending a chapter or shutting a book, did not end the tale.
Having admitted that, he would also avow that happy endings were never difficult to find: “It is simply a matter,” he explained to April, “of finding a sunny place in a garden, where the light is golden and the grass is soft; somewhere to rest, to stop reading, and to be content.”” Season of Mists, Chapter 4.
I’m working my way slowly through the @thesandmanofficial volume 2, reading the printed comics as I listen to the audiobook. Today I finished the chapters that comprise the Season of Mists trade paperback. Morpheus meets up with his siblings, and is prompted to return to Hell in an attempt to rescue Nada, an African Queen he trapped there after she refused to stay with him in the Dreaming. Lucifer quits, and hands the key to Hell to Morpheus, who then is visited by gods, angels, demons and fairies, all petitioning for the right to possess Hell, and variously threatening or cajoling him in an attempt to plead their case. It’s a fascinating examination of the role of death and the afterlife in many different traditions, and the audiobook is stunning, with a who’s who of celebrity voices. David Tennant as Loki was particularly fantastic, as is Bebe Neuwith as Bast – and I couldn’t love @katdenningsss as Death more if I tried.
If you get the chance to experience this comic in both print and audio form together, I highly recommend it. A multi sensory feast of story, image and sound.
I did also have a momentary pang of jealousy as Lucifer hangs out on the beach in Perth, just quietly. Lucky devil.
#TamaraReads #2021readingchallenge 156/2021