Julia and the Shark, by Kiran Millwood Hargrave 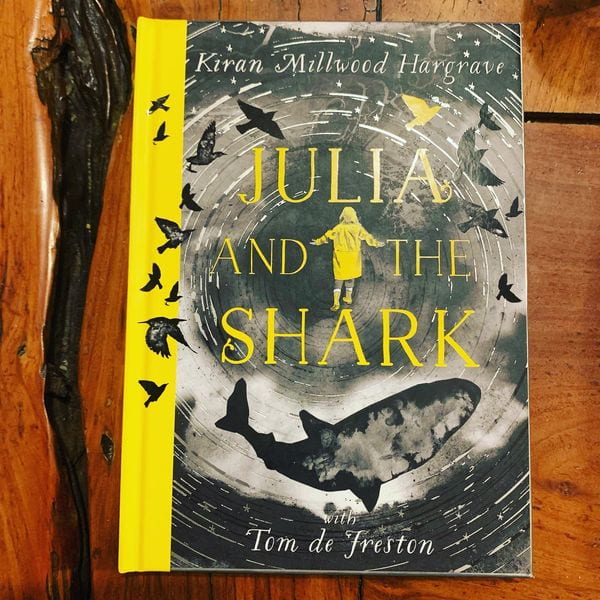 Julia and the Shark, by Kiran Millwood Hargrave

“I am ten years and two hundred and three days old. I had to ask my dad to work that out for me, because numbers are not my favourite. Words are. You can make numbers into words, but you can’t make words into numbers, and so words must be more powerful, mustn’t they?”
Sigh. Have I already said I had a favourite middle grade book for the year? Whatever it was, I think it has some serious competition. Julia and the Shark is written by @kiran_mh and illustrated by @tomdefrestonart, and it’s a stunning book. Julia tells us the story of the summer she spent at a lighthouse with her father, who was trying to fix the lights, and her marine biologist mother, who was trying to find a shark. Not just any shark, though. One older than the trees, moving though the water slowly for centuries, and possibly holding a secret that might help people, if only they could unlock the mysteries it holds. Julia loses her mother, though, and she finds the shark. Don’t worry. That’s not spoilery.
There is something deeply poetic about this novel, pure and passionate, and at once both deeply profound and deeply simple. If I had read this as a child, I’d have resonated deeply with Julia. As an adult, I feel strongly connected to both her father, struggling to hold everything together for the people he loves, and her mother, who (spoiler alert!) is dealing with some mental health issues.
Content warnings: this book depicts a parent with bipolar, and the impact of their extremes on the people around them, including an overdose of pills which is presented with a profoundly sensitive touch. The emphasis is very much on the power of acknowledging mental health issues and seeking appropriate help.
I know, it sounds heavy. It’s really not. It’s such a beautiful narrative, supported and enhanced by the incredible art of de Freston. I am in awe of this book. I’ll be reading it again.